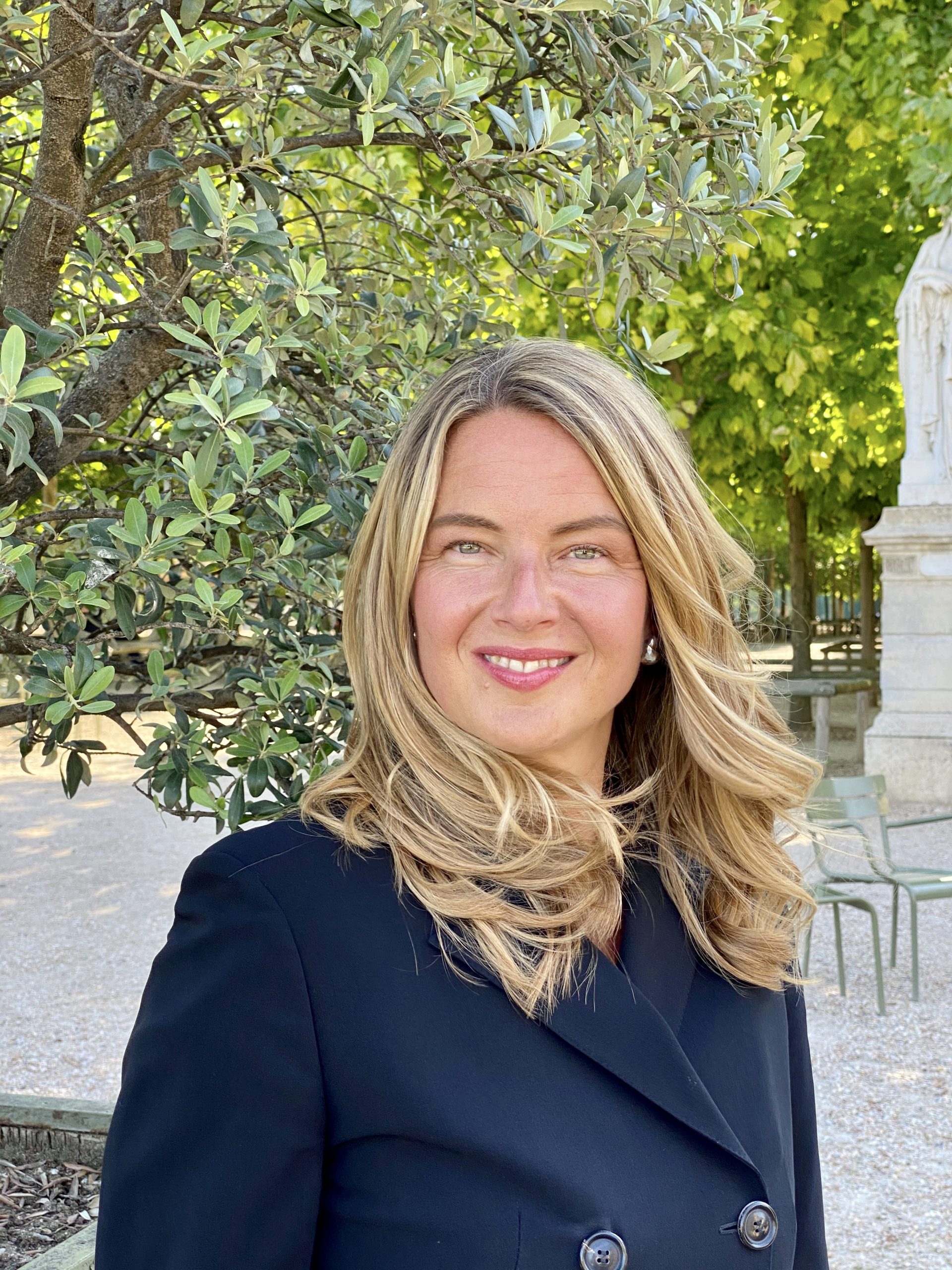 PERSPECTIVE: On freedom confinement, and angst

On Sunday I did my first train ride with a mask, on Monday I got on the last flight to escape from Paris to the country side before lockdown which happened on Tuesday. How the world has changed just within two weeks or even 48 hours…

Two developments have shaken the world over the last 12 months: firstly, the urge to finally become aware of how we treat our planet, our context in a larger sense if we intend to live here for a while and leave something for next generations – the climate crisis. Secondly, – the necessity and, so far, helplessness to manage a virus of an unknown kind that threatens human health – the coronavirus crisis. The big difference: the climate crisis is less immediate, effects will not be felt by those who are making decisions today, but by their children, whereas the coronavirus crisis is real-time action happening in front of our eyes. The non-response to the abuse and impact on our context and at the same time the action (although delayed) to an immediate threat to the human race is easily explained by the classical insurance phenomenon. Why spend money on something or make sacrifices to take precaution for an event in the future that might or might not occur and potentially not affect the actor who has expenses or reduced welfare as he or she is taking precautions for such an insecure future event?

However, somehow these two phenomena are related. As my friend Axel Dransfeld mentioned recently: “I have the feeling that this planet is shaking us off at some point because we’re not taking good care of what we have been entrusted.” And indeed, the irony of travel bans, lockdown and the corona crisis has not only resulted in tourism dropping to zero in cities like Venice, but for the first time in decades inhabitants of Venice report clear waters; fish and swans are returning to the lagoon which has been known for the dirtiest canals ever due to cruise ships, excessive human pollution and an excess of everything we can buy and consume.

Don’t get me wrong, I’m not vetoing consumption and I’m a frequent traveler (at least I have been) for years, so I have contributed to the issue at hand and take responsibility for a share of it. But what strikes me is that major decision-makers in policy seem to be blinded of reality and albeit they are in the position to make this world a better place they continue messing it up to pursue individual power games. On top of that, other people in power do not raise their voice to prevent this. How did we get there?

When egoism and greed join forces we’re in trouble. My generation has no idea what life after WWII was or even in between the two World Wars. We grew up in modernity. But as Maxime Tandonnet mentioned this weekend in Le Figaro in his article ‘Le coronavirus ou l’imprévu en histoire’ (the coronavirus or the unexpected history): “The coronavirus is an immense lesson in modesty for the modern man, convinced of having mastered the vagaries of nature and its destiny.”

We have gotten used to the fact that we can have anything, anytime, anywhere. However, if there is a question mark to access arising in the context we all have abused, modern man responds with even more elaborated egoism and free-ranging survival strategies (I can’t believe that gun sales are on the rise in the US in the midst of a crisis in which humanity counts). It is incomprehensible and irresponsible that people joke about how they break the rules in Germany and take advantage of the “time off” to travel with families and even spread the virus further – just for fun or to entertain their children. It is shocking that policy-makers seem not to be able to read and understand what science has found and react accordingly instead of covering up alarming numbers.

Today we know that each country affected by the virus has followed the same path irrespective of its healthcare system’s qualities and capacities (https://medium.com/@tomaspueyo/coronavirus-act-today-or-people-will-die-f4d3d9cd99ca – see in particular table 7). The only way to lower the curve of new infections is a quick lockdown. Social distancing is not enough. It is unbelievable that even some physician associations are not facing reality in Germany and not recommending this to political leaders, but rather voting against it. Here is more evidence which is easy to understand: 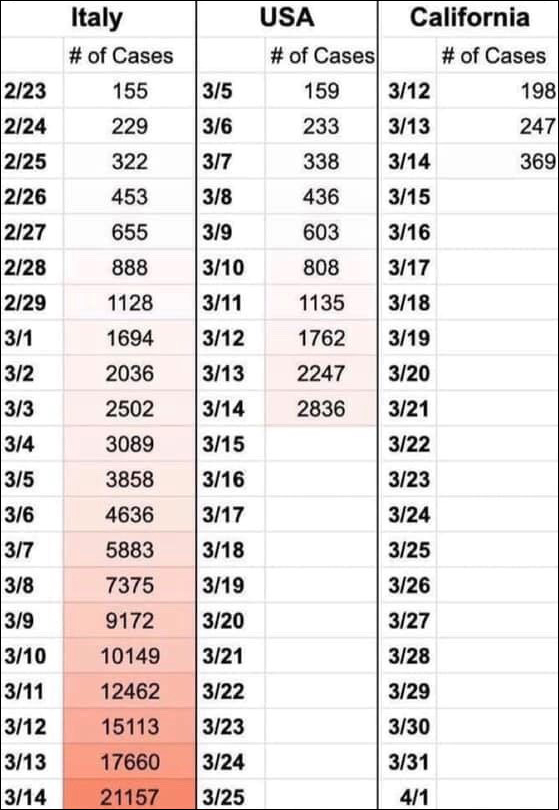 Today, cases in Germany have outpaced the numbers in France – maybe a consequence of celebrating good weather in parks and cafés this past weekend in Germany. The French have been as foolish as the Germans, organizing picnics at the river Seine – as if there was no crisis at all. But now they are all locked away. Luckily.

Yes, it’s hard. Most Western cultures have freedom of movement as a core value incorporated in their cultures and constitutions. As a German born, I have an idea of what it means to be in “lockdown”. A major moment and maybe first step of reunification was not the fall of the wall, but when Hans-Dietrich Genscher stepped on the balcony of the German embassy in Prague and declared that those who had spent weeks in confinement at the embassy as they were seeking refuge from the former Eastern German Republic, would be able to travel to the West in freedom. Marius-Mueller Westernhagen was projecting this development in his song “freedom, freedom is the only thing that counts” which was released in 1987 – two years before Eastern Germany’s regime started falling apart. In light of the current developments there are YouTube comics reversing Genscher’s speech and indicating that the borders will be closed which now already happened, restricting one of our most cherished values: freedom.

There is a parallel of this predictive capability to today’s developments and our response to the coronavirus except for German developments in the 1980s were positive and therefore facilitating themselves whereas current developments are negative which is not well perceived by human nature and modern man as described above. Science fiction films like “contagion” (2011) saw this coming. Bill Gates gave a TED talk in 2015: “The next outbreak? We’re not ready” (https://www.youtube.com/watch?v=6Af6b_wyiwI). Leading US scientists are criticizing the level of preparedness in the US as it is further impacted by a healthcare system that sets the wrong incentives: “A threat as dire as the new coronavirus exposes the weaknesses in our society and our politics. If Americans could seek testing and care without worrying about co-pays or surprise bills, and if everyone who showed symptoms had paid sick leave, the United States could more easily slow the spread of COVID-19. But a crisis finds a nation as it is, not as its citizens wish it to be” (https://medium.com/the-atlantic/the-u-s-isnt-ready-for-what-s-about-to-happen-f9023687fc37).

There is also a positive aspect of human nature that prevails in times of crisis: helping. People are “social animals”. If basic survival is secured they are actually quite community and context orientated (except for that the “me, me, me cultivation” of recent years has sometimes reduced this inherent behavior). Having lived far away from family and old friends in situations of global crisis (for example 9/11) I was always overwhelmed by the help and wave of commitment I experienced after a terrible event in a foreign country. As sad as it is, sometimes it takes a crisis to reinstall this generic sense of community orientation. Italian sociologists are already predicting a new solidarity emerging as a consequence of this crisis. We shall see and hope. Because this time dynamics are a bit different. I was lucky to listen to Ed Schein when he first presented his new book “Helping” many years ago. It’s a great read in general, but his central message (after caring for his deadly ill wife) was that helping is a two-way approach: it takes someone who would like to help, but at the same time the other person has to be willing to receive the help. Whereas in prior crises help was well received, this time human beings are encouraged to “take help and keep a distance” which changes dynamics of a society – and again nurtures egoism. Just a look into the faces of shoppers rushing through supermarkets and emptying shelves tells you everything about this inherent confusion as helping and human response to helping is subdued. Let’s stay optimistic that at least people will take care for each other at a distance and bond virtually. Keeping a distance means that you care at the moment as Angela Merkel rightly said.

What you can do:

What politicians can do:

What companies can do:

If you still don’t believe this is real, look at this video: It can’t be all that bad – Quarantined Italians record messages for “themselves from 10 days ago” during Coronavirus pandemic: https://www.youtube.com/watch?v=o_cImRzKXOs

With all that said I remain optimistic as always and I look very much forward to seeing you all again hopefully soon in person – I still believe it is the essence for human and business interaction. We will also offer you our online support and services and are reachable during this crisis. We can all do our share as of just now to get back to normal as quickly as possible. In the meantime, please stay safe and healthy!